All about the wine All around the wine The news

Jura – a place for hipsters-winemakers

Some information about the region

Jura is about 1850 hectares, a very small and narrow region about 80 km long. Unfortunately, in the 19th century, local vineyards suffered greatly from the invasion of the “bloodthirsty” phylloxera, which led to their reduction by almost 90%.

About an hour’s drive from Geneva airport was the first winery we planned to visit. Domaine André et Mireille Tissot is considered one of the largest wine exporters in the region, although it produces only 100,000 bottles a year (300 barrels), which is just a drop in the bucket compared to the volumes of other wine regions in France. We were warmly greeted by the owner of the company with the winemaker Benedict Tissot, and without much further ado, we were immediately seated at the tasting table. 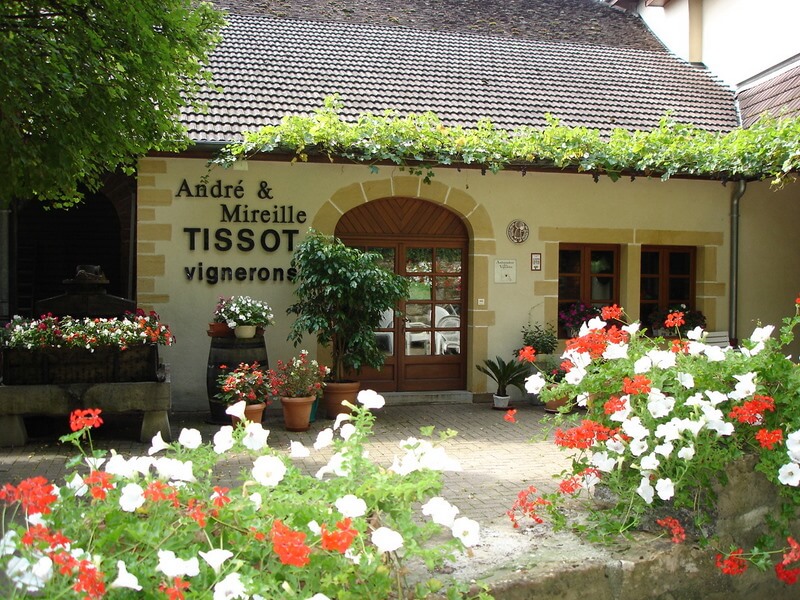 Red. The most popular local variety is called Poulsard, and it produces light, elegant wines with a strong fruity note, as well as sparkling wines in the Crémant du Jura appellation. The fragrant Trousseau prefers a warmer climate, which is why it is rather rare today. Pinot Noir is also very popular here.

White. The region’s trademark is undoubtedly Savagnin, from which a wine called Vin Jaune is produced, which made Jura famous throughout the world. Its uniqueness lies in the cooking process itself when a long exposure takes place under a yeast film. Chardonnay is also very popular here, the style of which is sustained in classical traditions, which is definitely due to the neighbourhood and influence of Burgundy.

So, the first wine we tasted at Domaine André et Mireille Tissot was a very classic Crémant, then light reds followed, and only then we moved on to tasting white wines. Some violation of the usual sequence of the tasting was due to the fact that the white wines of this region are distinguished by a higher intensity and denser structure than light reds. Red wines seemed to us quite ordinary – drinkable, pleasant, but not causing any special delight, but then the turn came … We read so much about this wine, about its aromas and unique taste, and finally, the moment came, when we were able to move from theory to practice! All four of us energetically plunged our noses into glasses, expecting miracles and incredible discoveries. I must say that our first impressions were chaotic and unclear. We looked at each other in confusion, subconsciously expecting help from our colleagues in determining our own feelings. The uniqueness and originality of the aroma really amazed us! We tasted wines from different vineyards and came to the conclusion that, given a common denominator, these wines are very different from each other. The composition of the soil, climatic conditions, and the location of the vineyard make each wine unique. Finally, we also tasted the world-famous Savagnin – Vin de Paille dessert wine and, overflowing with new sensations, set off again on the road, to visit the next producer, to understand whether this unique aroma was a feature of the house of André et Mireille Tissot or whether we will meet him and other winemakers.

The four main appellations are Arbois, Château-Chalon, Côtes du Jura and L’Étoile. Château-Chalon – the pearl of the region – is a small town in the vicinity of which the highest quality grapes are grown and unique wines – “long-lived” are produced. L’Étoile is a very small appellation, whose soil composition is almost identical to that of Chablis, thanks to which all wine critics note its enormous potential. Arbois produces mainly red wines. This small town is also famous for the birth of Louis Pasteur, the father of modern winemaking. Côtes du Jura is a very classic appellation of the region. Crémant du Jura is an appellation that produces mainly sparkling wines. Macvin du Jura – wine of late harvest is fortified with distillate and gets a drink similar to white or pink port.

It was almost completely dark when we arrived at the Philippe Bornard winery. This producer is often jokingly called the rock star of the region, and you can find his wines all over the world: from New York to Melbourne. Philip received his “star” status after participating in the television show L’Amour est dans le Pré (“Love in the meadow”), in which a peasant had to find his beloved. The show brought Philippe and his wines immense popularity among the French public and wine connoisseurs. Philip’s son took us to a small, cozy cellar, where we tasted excellent wines of various vintages and styles. 2007 Poulsard, harvested from vineyards near the town of Arbois, was amazing! We add that Philippe Bornard is also a biodynamist.

This fox appears on the labels of all Philippe Bornard wines.

We stopped for the night at the winery Les Chais du Vieux Bourg, where we were greeted by a very cordial and warm welcome with a richly set dinner table and interesting conversations.

Ludwig Bindernagel, owner and chief winemaker of the estate, was a very successful architect in the past. His wife Nathalie Eigenschenck, a hospitable hostess and an excellent cook left her career as a flight attendant after meeting Ludwig. After the wedding, the couple settled in the town of L’Étoile and bought a house with an attached wine cellar, as Ludwig decided to produce wine, although he had absolutely no experience. At first, he bought four hectares of vineyards, but after a couple of years, he realized that this was too much for one person and as a result reduced the area of ​​his “wine” estates to two hectares. For many years he experimented, honed his skills, and now his wines are on the wine lists of the best restaurants in the world, including the Noma restaurant, whose representatives also stayed with us in a small hotel at the winery and admired Natalie’s culinary masterpieces. We finished this wonderful and eventful day by tasting various Marc de Bourgogne vintages in the wine cellar of the estate. An “official” tasting was scheduled for the next morning.

If we are talking about the gastronomic “celebrities” of the region, then Comté cheese, which goes well with regional wines, rightfully occupies the first place on this list. We also note the famous Bresco chicken – the only bird in the world that has been awarded the AOC status. We highly recommend trying the local delicacy – morel mushrooms. In one of the local small cafes we tasted them in Vin de Jaune sauce – great!

The next day, early in the morning, we went to Domaine Jean Bourdy, where the 18th generation of winemakers has been producing wines in the region. We were warmly greeted by the owner of the domain himself and showed us his wine cellar, which looked like an old museum, the exhibits of which seemed to be covered with age-old dust, and the air was saturated with secrets and riddles. Jean-François Bourdi took us to the tasting room, where all the wines of the estate were kept. We looked with delight and surprise at the “wine exhibits” of the cellar, among which there were even vintages of 1890. The tasting began with a 2009 red wine (33% Pinot Noir, 33% Poulsard and 33% Trousseau) – soft, silky, amazingly drinkable! Then came the turn of different wines from the Savagnin variety.

Expressive aromas of wines are largely associated with the original technology of their production. During the maturation of wine in barrels, some of it evaporates, and the air formed in the empty space of the barrel actively contributes to the formation of a yeast film (candy cap) on the surface of the wine, which gives the final product this unique dense aroma and subsequently protects against oxidation. This technology is a bit like the production of sherry, but “yellow wines” are not fortified!

Vin Jaune (“yellow wine”) – produced throughout the region, aged under a yeast film for six years and three months. It is characterized by a fresh, intense taste with a long aftertaste. Aroma and taste are perfectly integrated into each other. A stunning wine that will delight wine lovers of the Jura region. A unique opportunity to taste old vintages.

There is also a more regular wine that is produced within the Côtes du Jura appellation. It is also aged under a yeast film, but its exposure time is much shorter. Usually, these wines are aged from one to four years. The wine has a strong fresh taste and a long aftertaste. The aroma and taste lack a bit of harmony, but thanks to its affordable price, this wine can be an ideal start for exploring the wines of the region.

Château-Chalon – wine produced in the small town of Château-Chalon. Aged under a yeast film for at least six years and three months. Bright, dense, memorable taste with a long aftertaste. Aroma and taste complement each other perfectly. An excellent wine with great aging potential, a real gift for lovers of old vintages.

Vin de Paille is a dessert wine for which grapes are dried in a pantry on layers of straw. The minimum aging period in an oak barrel is 18 months. Approved grapes are Savagnin, Chardonnay and Poulsard. The minimum permitted alcohol percentage for such wines is 14%. Intense liqueur-sweet wine with aroma and taste of peaches, flowers and fragrant honey.

We start by tasting the Chardonnay and Savagnin of the 2009 vintage, aged under a yeast film for 4.5 years. Unique aroma and taste, softer and more elegant in comparison with the wines of other estates that we have tasted earlier. Then we tried Vin Jaune and Château-Chalon 2006, which impressed us with the pronounced aroma of hazelnuts, spicy Stilton cheese, smoke and curd cream. Intense wines with perfect balance and great aging potential. Long-lived wines. We tried the next wine blindly and tried to guess the harvest year for ourselves. Our guess was the 70s of the last century. There was no limit to surprise and delight when we learned that we had tasted 1954 wine. It was just great !!! Delicate aroma with notes of cream, cream, dried apricots, tobacco and pine nuts. Delicate creamy structure, perfect balance make this wine truly unforgettable!

We said goodbye to our hospitable host, now we will be able to enjoy great wines in Riga too, as well as provide such an opportunity to all our customers!

So after visiting Bourdy we returned to Ludwig Bindernagel. The tasting room was set in the garden, between the house and the wine cellar. The style of this house’s wines can be generally described as very serious, mineral and straightforward. This style will undoubtedly be appreciated by fans of “natural” wines, restaurants with true philosophy. This is the level of Noma and other world-class restaurants!

Our stay in this hospitable and cozy region was coming to an end, we packed our bags to head on to Chablis. (But that’s a completely different story!)

We visited here for the first time, but we hope to characterize our feelings as unbiased and real. Jura, despite its tiny size, impressed us with the skill, professionalism of local winemakers, as well as the quality and uniqueness of the wines that are produced here. This is definitely the place we would love to come back to again!

Some points that, in our opinion, characterize Jura:

We advise you to definitely visit the Jura – a unique, one of a kind region. Hipster Region!