Rioja wines are getting a new classification system

The future of Rioja wines

The new system will no longer use aging in oak barrels as the primary indicator of the quality of Rioja wines. Instead, wineries will be motivated to emphasize regional microclimates and the unique characteristics of individual vineyards.

Experts in the world of wine acknowledge that the new system is similar to the Burgundy system. What do we think? These changes are significant and positive for Rioja (and Tempranillo) wines! 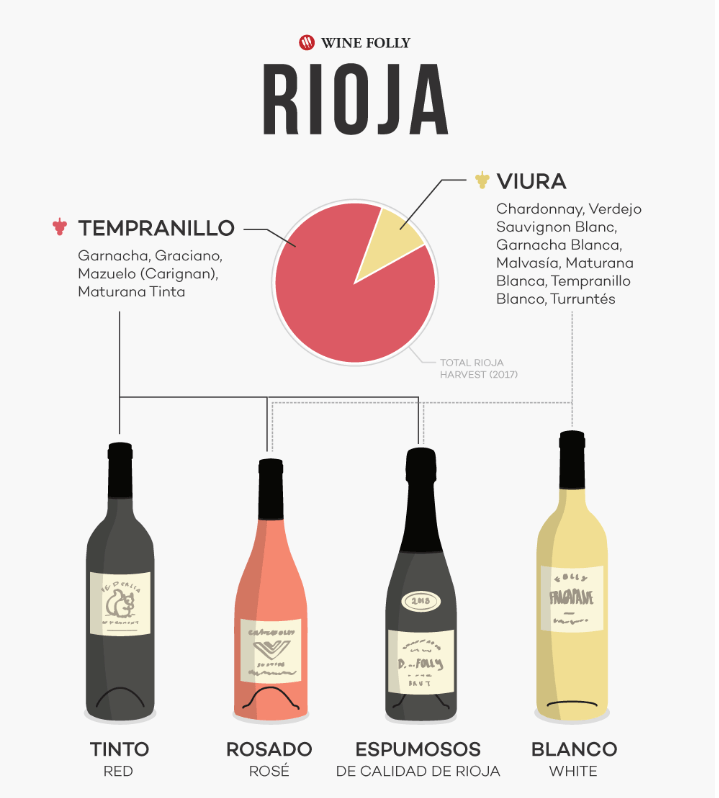 A brief overview of the Rioja wine rules

These Rioja wines are not subject to aging requirements. They are usually minimally aged in oak barrels and have a saturated style. Previously, this category was awarded to the lowest quality wines in Rioja. But now some great wines can fall into this category (especially Rioja Blanco from the Viura grape variety).

Crianza was previously the category for quality wines from the Rioja region. The aging period allows Tempranillo wines to become more complex over time. Expect a red fruit flavor with inconspicuous spice notes.

The reserve is a heavyweight in the Rioja region. We think that this category will continue to be a sign of quality in the region, as it also includes the new category of sparkling wines, Espumosos de Calidad de Rioja.

Reserva red wines usually have a fantastic balance between fruit and structure (eg tannins and acidity), but the ripeness of the drink is complemented by notes of spices and dried fruit. It is the wines of this category that are worth keeping in the cellar!

The once-forgotten category is back, thanks to the creation of Gran Añada sparkling wines!

If we compare the figures, these wines use the same production methods and meet the same requirements as vintage champagne.

We suspect that these wines will be on the market no sooner than 2020.

A new regional label has been introduced for Rioja wines!

This is the biggest change in the wine world in Rioja, and there is still a debate about whether this is the right thing to do.

Some experts say that the best Rioja wines are made from grapes grown in different places, so regional classification will not improve quality. Others argue that the new rules are not strict enough and that the Rioja region should introduce higher standards.

Despite the different views, anyone who has visited the Rioja region will agree that there is a wide range of soils and microclimates here. The idea that it is now possible to buy wine made from grapes grown in a particular vineyard is very pleasing to both modern producers and wine collectors.

You can be sure that all wines labeled “Rioja” are made from grapes grown throughout the La Rioja region.

For example, if you’re a fan of Tempranillo wines, you’ll love some of Rioja Oriental’s producers (such as Ontañon and Barón de Ley). The problem in this area is that a significant proportion of the wine produced is mass-produced wine.

Rioja Alta and Rioja Alavesa wines have more minerality and elegance. Many of these wines are designed to last for 20 years or more.

Wines from the Rioja region can now be labeled with the village or municipality where the grapes were grown. If the vineyard is located in the territory of two municipalities, up to 15% of the grapes grown in the neighboring village may be used in the wine.

However, it takes time to find out which villages will produce their own wines. There are 145 municipalities in Rioja (77 in Rioja Alta, 50 in Rioja Oriental and 18 in Rioja Alavesa). Lots if you want to memorize!

Viñedo Singular resembles Burgundian lieu-dits (vineyards with unique names). To obtain this category, the producer must apply to the Consejo Regulador for his vineyard to be recognized and authorized to indicate its name on the label.

On the one hand, Viñedo Singular is a very good innovation, as we will be able to find out the names of the special vineyards. However, the Viñedo Singular regulation encourages winemakers to produce wines from grapes grown in the same vineyard (which is still a rarity in the Rioja region).

On the other hand, if we remember that there are more than a thousand people in Burgundy, the thousands of Viñedo Singular will make the Rio region even more difficult and difficult to get to know.

However, despite the obstacles, the changes introduced in Rio have brought positive effects to the world of wine.